The peach’s journey around the world

The peach’s journey around the world

In China, the world’s biggest producer today, peaches are not only a delicious food but also a mystical fruit. The Chinese have the saying, “The peach spring beyond this world”. They use it to describe secret, unspoiled natural wonders off the beaten path. The origin of this saying is a Chinese tale written two thousand years ago. One day, the fisherman in the tale discovers a “peach blossom valley” filled with magnificent wonders where the people lived in harmony with nature, away from the outside world. The peach blossom valley is a paradise where peach trees spread as far as the eye can see and the ground is covered with peach petals. Since that tale was written, peaches have been a symbol of immortality and eternity in China.

Large, light green “honey” peaches grown near Shanghai from July to August are said to be the world’s juiciest peaches and have a stunning aroma. In China, the peach is rubbed for a few minutes before eating to release the juice and get the most out of the fruit. The skin is then peeled off and the peach is eaten without being sliced.

Peaches were brought to Iran and Anatolia from China, and then from Spain to America. This juicy fruit has been embraced not only in every kitchen and cuisine it encounters but also by every language. For example, idioms about peaches in English are positive and express happiness. In French, “peachy skin” is used to describe healthy, soft and pink skin. “Avoir la pêche” means being full of energy, happy and feeling great.

Now, let’s talk about how peaches are used in different cuisines. The first thing to mention is peach cobbler, which is popular in America, particularly in the southern states. This dessert is a must-have for summer buffets in Georgia, a.k.a. “The Peach State”. In this classic dessert, peaches are flavoured with spices such as cinnamon, nutmeg and vanilla, the fruit mix is topped with a simple, melt-in-the-mouth batter and then baked. When peach juice and the butter in batter start to bubble, the topping turns golden brown and the glorious smell fills the room, it is taken out of the oven and served hot with vanilla ice cream. 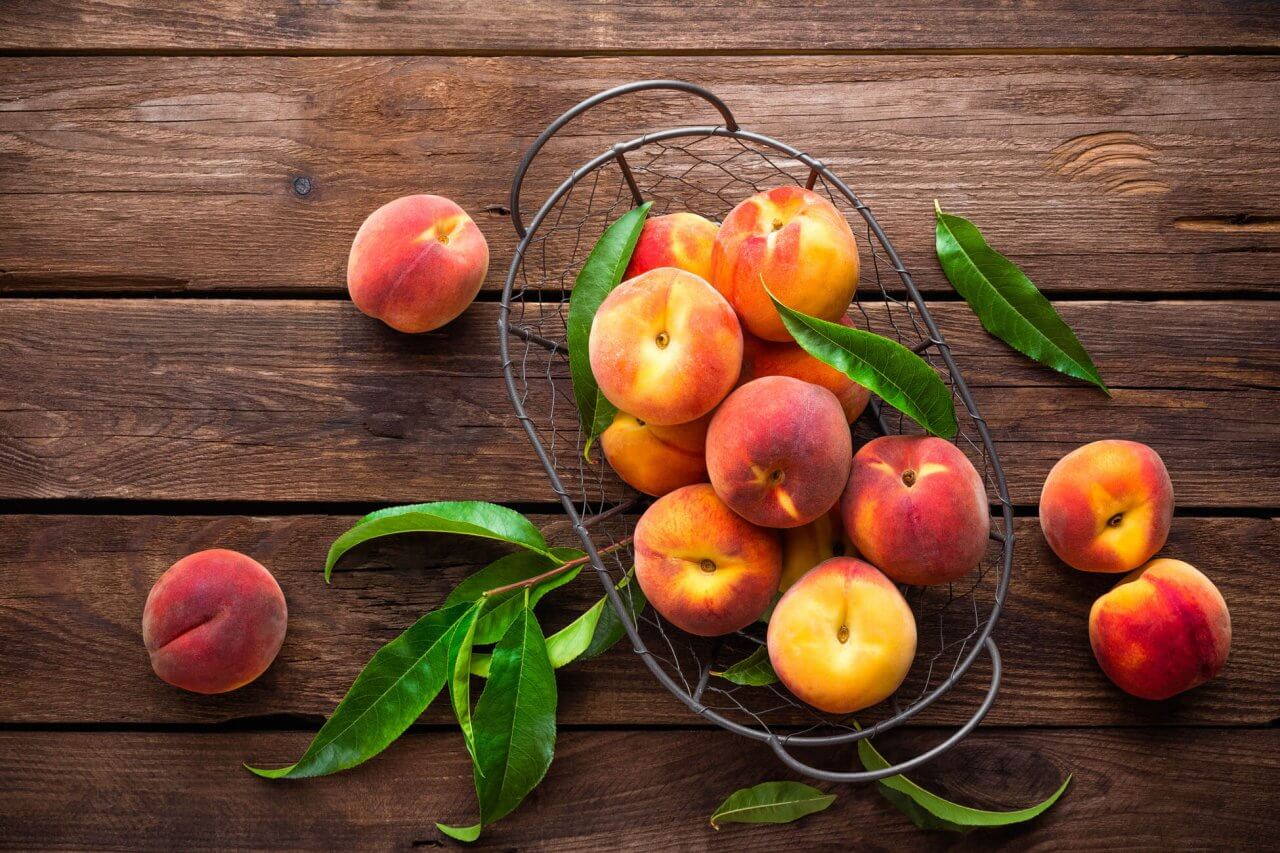 In Italy, the legendary Bellini cocktail, peach-shaped biscuit “pesche dolci” or a few slices of fresh peach added to wine at the end of meals show just how popular this fruit is. The Bellini, created by Harry Cipriani in Harry’s Bar in the 1940s, takes its name from the 15th century Venetian artist Giovanni Bellini. Today, this cocktail is prepared and interpreted with different ingredients all around the world. Its original version features Prosecco and white peach with a skin nearly green in colour and a fleshy, white inside. For a good Bellini, all of the ingredients must be extremely cold. The peach puree must be freshly prepared but kitchen appliances are a definite no-no. The peaches are peeled and the flesh is pureed.

There are sweet stories about peaches in French history. The Paris city gardens built in the 17th century in Montreuil, a Paris suburb, were surrounded with miles of walls to create an environment suitable for growing peaches. The peaches grown in these gardens became famous throughout all of France and their fame spread from the United Kingdom all the way to Russia. They were sold in the nearby Les Halles market and sent to the palaces bearing a special seal. The gardens gradually disappeared in the 19th century. Today, there is work ongoing to revive them. Considering that fifteen million peaches were once harvested every year in those gardens, you can imagine the smell of peaches spreading all over Paris in season.

When talking about France and peaches, you can’t overlook Peach Melba made with peaches, vanilla ice cream and raspberry puree. Peach Melba’s story being in the late 1800s with the friendship between Australian soprano star Nellie Melba and Auguste Escoffier, the most famous French chef of all time. The story goes that the chef was inspired by the swan-shaped boat he saw on stage while watching Nellie perform. He imagined a fresh peach and vanilla ice cream on a swan carved from ice. The chef served this dessert to Nellie, who was a regular at his restaurant. He named it Peach Melba as a symbol of his admiration for her. In the original recipe, Escoffier recommends using the peaches from the city gardens in Montreuil that we mentioned earlier. Here is the recipe: Blanch the peaches in boiling water for two seconds and then place them in iced water. After letting them sit for a few seconds, peel the peaches, sprinkle with sugar and refrigerate. When serving, first put the vanilla ice cream into your chosen dish, followed by the peaches and then the freshly-pureed raspberries. Optionally, sprinkle some flaked almonds over the top.